The stunning Kiruna Snow Festival is just about as diametrically opposite to conventional concepts of ‘festival’ as it is possible to get. But it is one tremendous party, just the same. Kiruna is 140 kilometres north of the Arctic Circle, in the north of Sweden. Astonishingly, it was once the world’s largest city (when measured by area). A little sensible re-organising by the authorities have made that claim archaic now but it is still an important centre – for mining and tourism.

The Snow Festival itself was first held in 1985, to coincide with the launching of the rocket Viking from the nearby space centre of Esrange. Since then it has developed into a totally unique celebration of traditional – and extremely untraditional – winter activities.

For example, you might well expect there to be skiing, snowboarding and ice skating competitions here – and so there are. Together with reindeer and dog sledge racing and sleigh rides. Rather less predictable, however, are the scooter jump displays, the Mr Snowman Strong Man competitions and, the centrepiece of the Snow Festival, the incredible ice-sculpting contest. In this final event, teams compete against each other to create the most original sculptures from a single 3 by 3 metre cube of snow. The results of this artistic challenge are simply awe-inspiring pieces of work, often quite majestic.

In addition to the contests and displays, though, Kiruna is noted for its parties. Some of these are held in huge igloos, which can hold around 200 people, and many are in the ‘Winterland’ area of Kiruna itself, where you can also find your obligatory reindeer kebab and bear steaks. There are also numerous art, handicraft and fashion exhibitions as well as concerts and many informal ‘singalongs’ – all contributing to making the Kiruna Snow Festival one of the genuinely friendliest of festivals around.

All of this takes place at the end of January and beginning of February each year in a place where the average daily high temperature at this time is around -8° and there’s barely any real daylight. It is, though, the perfect place for seeing the Northern Lights or going cross-country skiing. The world famous Ice Hotel, recently voted Sweden’s Best Tourist Experience, is also quite close in the village of Jukkasjärvi.

The official website of the Kiruna Snow Festival will tell you that ‘it is easy travelling by car’ to Kiruna. Well, it would certainly be a wonderfully scenic journey – when it was daylight. The two main routes are either by following the coastline or by driving through the inland forests – but routes are about 800 miles. There is, however, an airport at Kiruna, which has regular scheduled flights and is an easier way to arrive – so you can save your adventures for the Snow Festival itself.

Once you arrive in the city, there are a number of very reasonable hotels that are used to catering for tourists and three very well-reviewed hostels – the Yellow House, HI STF Kiruna and HI STF Lappland – the latter two being affiliated with Hostelling International and offering special rates for members of the organisation.

For snow sport enthusiasts, who always seem to love a good party, then the annual Kiruna Snow Festival represents the opportunity of visiting one of the world’s remotest cities – and having one sensational time whilst you’re there. 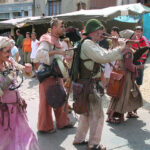