In the heart of Transylvania, it would be anticipated that the Sighisoara Medieval Festival might turn out to be simply a ‘DraculaFest’ but this is, in fact, a long way from the truth. Sighisoara might have been the birthplace of the legendary Vlad the Impaler – whose name inspired Bram Stoker – but it is also one of the most beautifully preserved, inhabited walled medieval towns in Eastern Europe and its annual Medieval Festival is a celebration of the customs, beliefs and lifestyles of those times.

It was in 1992 that the Sighisoara Medieval Festival was initiated and now this town of just over 30,000 inhabitants is augmented by as many as 20,000 visitors for the last weekend in July each year.

For three days, the narrow streets in the shadows of the old town citadel are packed with troubador music, parades in medieval costumes, street entertainers and craft displays. Add to that open-air concerts and medieval themed events and you begin to get some idea of the atmosphere created. The whole place comes alive with gladitorial contests such as jousting, as well as conferences, dancing and street carnivals. Many Romanians come to experience the medieval atmosphere but, in recent years, more and more people from overseas have started to join them.

Sighisoara is a popular tourist location within Romania and is a town of two different parts. The famous Citadel sits magnificently on top of a hill – a World Heritage Site and the focal point of the Medieval Festival. With stages around the various plazas and artists and face painters on almost every corner, this part of town is what draws so many people to Sighisoara. The impressive walls of the town still have nine perfectly preserved towers – dediacted to trades such as the Shoemakers, Tinsmiths and Tailors. The lower part of the town is in the attractive valley of the Târnava Mare river.

Of course, Vlad the Impaler is an important element in the life of this part of Romania. Born here as Vlad Tepes in 1431, there is a bust of the notorious Wallachian prince just around the corner from his birthplace, quite close to the 1360 constructed Clock Tower at the Citadel. There will often be Vlad and Dracula related events – including screenings of films at night in the Citadel itself. Next to Vlad’s birthplace is an intriguing museum of medieval weapons and it’s also worth taking time to visit the Gothic looking Church on the Hill, where the graveyard has a particular atmosphere.

Although tucked away in the Mures County region, Sighisoara is only 30 miles from the airport at Targu Mures and 54 miles from Sibiu. It is 170 miles by road from Bucharest and the train station has daily services to Budapest (ten hours journey time), Vienna (twelve hours) and Prague (nineteen hours). There is a wide variety of accommodation available in and around the town itself.

Undoubtedly, the Sighisoara Medieval Festival is a unique opportunity to travel to one of Europe’s most enigmatically picturesque locations and fully explore the lore and legends of what was once Transylvania.

Open’er Festival
Next Post: Stars of the White Nights Festival 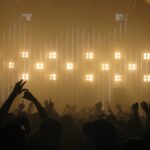