The Scoppio del Carro, literally the Explosion of the Cart, is a gloriously noisy way of spending an Easter Sunday in Florence. A technicoloured mix of pagan and Christian ceremony, this is the day when more than 10,000 people crowd into the stunningly beautiful Piazza del Duomo to witness a firework display at eleven o’clock in the morning.

The origins of this bizarre festival go back to the First Crusade at the end of the eleventh century. Pazzino de Pazzi, a member of an eminent Florentine family, was apparently the first person to climb the walls of the city of Jerusalem when it was recaptured by Christians. He was rewarded for his gallantry with the gift of three flint stones taken from the Church of the Holy Sepulchre, which he brought back to Florence and which were placed in the Chiesa degli Santi Apostoli. It became customary to use these flints to ignite a ‘holy fire’ each Easter, which would be taken through the streets of the city – both to celebrate Christ’s resurrection and to try to ensure there would be a bountiful harvest that year. The wagon that is now used in the procession was first introduced more than 500 years ago.

This wagon, known as the brindellone – the wobbly, tall one – is decorated with flowers and herbs and then pulled by two pairs of local white oxen through the streets, totally full of fireworks. It used to have a local beggar perched precariously at the top of the 30 foot structure throwing sweets to the crowds and four little boys sitting in specially designed little confessional-type boxes but ‘health and safety’, or perhaps common snese, put an end to that. The procession begins at Via del Prato whilst, simultaneously, another, bearing the flints to start the fire, begins at Santi Apostoli. Most people congregate in the Piazza del Duomo but there are good vantage points to see the procession along the route; the best probably being along Borgo Ognissante and Via Vigna Nuova.

There is a mass in the Cattedrale di Santa Maria del Flore – commonly known as the Duomo because of its magnificently constructed Brunelleschi dome – in which many of the congregation are dressed as 15th century nobles. Dozens of flag throwers perform in the square until, at 11 am, when the bells begin to peel. Using the flints, the bishop, in the centre of the cathedral, then lights a dove-shaped rocket. This ‘dove’, the columbina, subsequently speeds, along a wire, through the nave of the cathedral, out into the Piazza and into the cart, igniting the fireworks.

What follows is a twenty minute cacophony of sound, colour and smoke that is sure to terrify and thrill in just about equal measures. The bells keep ringing but you stand little chance of hearing them now; apparently it’s best to keep your mouth open as it lessens the chances of your ear drums exploding!

Florence is a city where history completely envelopes you, and at Easter, when the whole of Tuscany is beginning to show glimpses of the spring, it is at its scenic best. With sights such as the Ponte Vecchio, the Uffizi and the Boboli Gardens it is still like a living Renaissance museum.

Although the local airport, Amerigo Vespucci Aeroporto di Firenze, is steadily increasing its international traffic, the larger Galileo Galilei airport near Pisa also offers possibilities. Florence’s main station, Santa Maria Novella, is only about 500 metres from the historic centre of town and has excellent links with the rest of Italy. Driving to Florence should also be a delight in the spring, with probably snow still at the tops of some of the mountains and excellent motorways to Milan, Modena, Verona and Genova to the north and Rome to the south.

If Florence is one of those cities on your ‘must see’ list – and I suspect it is on most of them – then what better time to go that to witness the incredible Scoppio del Carro. 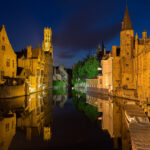