Roskilde Festival is one of the four major annual music festivals in Europe, along with the Glastonbury, Rock Werchter and Sziget festivals. It is held in the southern part of Roskilde in Denmark, on large fairgrounds that include almost 80 hectares of campsite for the festival-goers. Roskilde is Denmark’s first and most defining music event, started in 1971 by promoter Carl Fischer and a couple of then high school students, Mogens Sandfur and Jesper Switzer Muller. From its hippie roots, the festival now celebrates mainstream international music and is mostly attended by the youth of Scandinavia, as well as other European countries.

On the second year of the event, the task of organizing and promoting the Roskilde Festival was taken over by the non-profit Roskilde Foundation. Every year, proceeds from the event go to selected causes and charities. The festival also advocates environmental awareness, which is why cans, as well as plastic and glass bottles are not allowed to be brought into the festival site. Beverages are either sold in cartons or poured in mugs. Volunteers also collect thrown out bottles, which are later turned in for refund, with the earnings also donated to a cause.

Top international acts usually headline the four-day Roskilde Festival, attracting hordes of people from all over the continent. The 2007 shows brought in more than 100,000 people, including 3,000 artists and about 80,000 paying festival-goers. Some of the major names in music who have played in Roskilde include Coldplay, Jay-Z, R.E.M., Metallica, and the Red Hot Chili Peppers.

The festival features several stages housed under different tents. The Orange Stage serves as the main stage that, unlike the others, is set in open space that can accommodate more than 60,000 people. The Arena tent, meanwhile, is considered the biggest in Europe, as it can house 17,000. The other stages are dedicated to particular genres of music, which vary from rock to world music, hip hop, R&B, electronica, as well as spoken word. Notable Danish bands are also featured in the event.

Getting to the festival venue is easy via public transport. From Copenhagen Airport, about 35 km from Roskilde, you can take the train and then transfer to a shuttle bus right at the Roskilde station. The bus will take you straight to the festival grounds.

People who attend the event generally prefer to set up camp in the allotted area. Various amenities and establishments are usually set up at the camp site, making it a fairly convenient place to stay for a few days. The camp traditionally opens on the last Sunday of June as a “warm up” for the festival, which starts the following Thursday. Even this warm up has become an event in itself, just like the activities at the camp are very much a part of the whole cultural experience of the Roskilde Festival.

Alternatively, you can just stay at any hotel in Copenhagen and commute daily to the event venue.

The Roskilde Festival is traditionally held for four days starting the first Thursday of July. Tickets are necessary to get access to the festival site, as well as the camp grounds. More information is available from the official Roskilde Festival website. 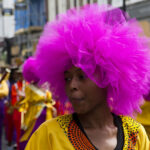