The French Grand Prix is held on the Circuit de Nevers Magny-Cours, so named because it is found near the towns of Nevers and Magny-Cours. Puzzling though that such a grand event is held in rural France, and the circuit has indeed been criticized for its remote location, but many racing enthusiasts actually enjoy tranquil Magny-Cours, especially after the glitz of Monaco and Montreal.

The circuit was first built in 1960 and expanded later in the decade, reopening in 1970 to become the main training ground of many French racing giants. The track was expanded further when the Formula 1 moved to Magny-Cours, changing the corners and lengthening the track from 3.84 km to 4.26 km. Now a modern circuit with smooth surfaces and hardly any elevations, the Circuit de Nevers Magny-Cours also has some of the best seats in the Formula 1, as fans are able to see more than one corner wherever their French Grand Prix tickets place them.

The circuit, nicknamed Magny-Cours, is rather compact, making overtaking difficult, except for the hairpin on Turn 4. Enhancements to the track were made in 2003, particularly to the last corner and chicane, to give more possibilities for overtaking. While it hardly achieved the desired effect, it did change the strategies of the drivers, most notably Michael Shumacher’s ingeniously unique 4-stop plan, which won him the 2004 French Grand Prix, only the seventh of eight that he had won. Two years later, in 2006, Michael Shumacher made Formula 1 history by being the first driver to win any Grand Prix eight times on only one circuit. This record was delayed in 2005 by Fernando Alonso.

Schumacher’s 8-time win is only followed by native Frenchman Alain Prost’s 6 wins between 1981 to 1993. Louis Chiron of Monaco, Juan Manuel Fangio of Argentina and Nigell Mansell of the UK each won four times. But one need not win multiple times at the French Grand Prix to make for a memorable race. In 1999, German driver Heinz-Harald Frentzen won despite not being a top bet or favorite that year. The win was helped by the weather: a considerable downpour gave most of the other drivers problems on the track. Since then, rainy weather at Magny-Cours had been seen as a good thing.

To get to Magny-Cours, fly into the Charles de Gaulle or Orly airports in Paris, which is a two and a half hour drive to the circuit. You could also take a train to Nevers, which is fifteen minutes from the track. It’s actually difficult to get around in rural France, so have a rental car arranged before you arrive in France. Rental cars may sound like an expensive option, but they’re not as expensive as taking taxis, which are much more costly.

The great thing about rural France, on the other hand, is that there are many cozy Bed and Breakfasts that you can stay at, which are much more cost-efficient than hotels, and most of the time, much more comfortable. If you’d rather stay in a hotel, there’s the Renaissance Hotel in Magny-Cours, and other hotels in Nevers and nearby Moulins. Some French Grand Prix enthusiasts even make a camping trip of the event. Family restaurants in the surrounding villages provide many fans, drivers and crew with hearty meals.

Although all grandstands provide great views of the circuit, the big favourite among French Grand Prix aficionados is in front of where the lap begins, as it gives a spectacular view of the dizzying Turn 3, as well as the Turn 4 hairpin. French grand prix tickets are available from the Worldticketshop website. 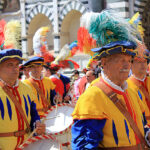