You are here: Home / Hungary / Festivals in Hungary

Hungary is undoubtedly a country of great contrasts and the variety of festivals in Hungary helps typify some of those contrasts perfectly. This is a country, after all, where you will still find small village festivals with folk traditions and rituals barely changed over the centuries. But it is also where some of the world’s most illustrious musicians make their way for cultural events of international significance. For many visitors from overseas, Hungary mainly means Budapest – and this captivating city also boasts almost an entire calendar year of top class festivals on different kinds. Of course, the Budapest Spring and Autumn Festivals are the most widely known, but there are many more.

For example, in January and February every other year – held on even-numbered years – the breathtaking Budapest International Circus Festival attracts thousands of overseas visitors to the city to watch some of the world’s greatest circus performers in action.

In March or April, Budapest’s own Titanic International Film Festival comes to town, bringing with it a host of international names. There hardly seems a month pass by without a Festival of some kind in the city, but special mention has to be made of the Sziget Festival, now established as one of Europe’s leading music and cultural gatherings. Held each August on Óbudai-sziget, an island in the middle of the Danube, this impressive 266 acre site hosts fabulous acts every year and attracts nearly 400,000 visitors. Organisers estimate that just about half of the festival goers come from outside Hungary so the atmosphere is very cosmopolitan.

The Spring Festival, at the end of March, with 200 or more separate concerts and similar occasions, has the added advantage of taking place in some of the city of Budapest’s most iconic buildings. World class performers in the fields of opera, ballet, classical music and even jazz, rock and folk, can be heard in venues such as the stunning National Gallery and the Hungarian State Opera House.

The Autumn Music Festival, established in 1992, held over ten October days, has consciously sought to highlight not only the works of the great classical Hungarian composers but also explore new developments in contemporary music and art. Both the Spring and Autumn Budapest Festivals now are amongst the most prestigious annual events in the country each year and have justifiable international reputations.

Festivals in Hungary means much, much more than simply festivals in Budapest, however. The country has a long folk tradition and is very proud of its heritage, which is reflected in many of the festivals held each year. Each part of Hungary has its folkloric traditions, which it is keen to maintain and celebrate. Prominent amongst these festivals is the Körös Valley Folk Arts Festival held in the town of Gyula, where there is a wide range of handcraft, music, dance and drama every July and August.

The spectacular landscape around Lake Balaton, and the small towns of Öcs, Pula, Kapoics and Monostorapáti host the charmingly named Valley of Magic Festival during June and July. Over 50 separate venues share out more than 800 individual events.

One of the more bizarre Hungarian festivals is the Busójárás Festival in the southern part of the country. Sometimes referred to as the Mohacs Carnival this fancy dress masquerade commemorates a famous occasion when the locals frightened away the Turkish invading armies: it is a spectacular affair.

Much more decorous is the August Debrecen Flower Festival when a parade of floats decorated with, especially, asters, carnations and dahlias takes to the streets.

In addition to the Spring Festival in Budapest, the end of March is a popular time for other events in a similar style. The Nagykanizsa Spring Arts Festival has many Hungarian and international orchestras, groups and artists attending, as do similar festivals in Szombathely and Szentendre.

Finally, the country also has a long tradition of Christmas markets during December – the best known being that held in Vorosmarty Square in Budapest – which, if you time your visit carefully, could coincide with one of the choir and organ recitals held in Matthias Church during the run-up to the festive season.

Whichever of the many festivals in Hungary you plan to visit, you can be sure that you will discover a country full of colour, variety and passion – and stunningly spicy authentic goulash! 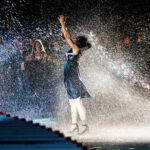