The Budapest Autumn Music Festival has been rebranded as the Café Budapest Contemporary Arts Festival. It gives people the ideal opportunity of visiting one of Europe’s most beautiful cities at a time of the year when it is perhaps a little less crowded. Now that more than 20 million people every year come to the Hungarian capital on the banks of the Danube, autumn is still sufficiently mild for visitors to wander the streets in a little more comfort. And the streets of Budapest are well worth wandering around.

The festival was inaugurated in 1992 and has developed considerably since then. Budapest has, of course, a rich musical heritage, including such eminent classical composers as Franz Liszt and Béla Bartók and the opera composer Ferenc Erkel, and the music of such luminaries is always sure to feature in the programme. However, the organisers of the Autumn Festival are keen to place just as great an emphasis on contemporary music, exploring new developments and forms and bringing them to a wider audience.

This imaginative programming has meant that in recent years there have been such innovative features such as avant-garde interpretations of the Bach chorales under the title of Bach and Contemporary Improvisation, and Rainforest 21 – a combination of classical Indian music and jazz improvisation.

The extensive programme of the festival now includes more than 90 separate events, involving performers from many different countries, as the organisers attempt to fulfil their aim of ‘making the city alive with living art’. This means that the city streets and squares come alive with jazz, dance, art and sculptures for the 10 days of the festival, which is usually held during the middle part of October each year. Additionally, film, photography and computer art are among other art forms brought to prominence during the Autumn festival.

The major musical venues in Budapest are the Petofi Hall, the National Concert Hall and the Franz Liszt Academy whilst the Hungarian State Opera House is one of the most spectacular of its kind in Europe.

One of the reasons for the increase in visitors to Budapest in recent years is, of course, the development of low-cost airlines which fly into the specially developed aircraft-shaped Terminal One at Budapest’s main Ferihegy International Airport, just 10 miles out of the city.

There is a wide choice of accommodation to be found in Budapest, ranging from the 5 star city centre Andrássy Hotel to the large, well-appointed 4 star Best Western through to many budget hotels in and around the city. Lots of information can be found on the official Budapest tourism website.

There are also two really well-appointed camp sites – and autumn in this part of Hungary is still quite mild at nights. The Camping Haller site is located in a quiet park in the middle of the city but the largest site, Romai camping, which has its own shop, post office, restaurant, etc, is about 7 miles outside. It does, however, have a suburban railway station close at hand, so access to Budapest is very straightforward.

Once you’re in the city centre, getting around presents few problems. There is an excellent Millennium Underground Railway. This is the second oldest system in Europe, but with another line close to opening. In addition, there are buses, trolleybuses, trams, and the suburban train system. There are also many taxis – but if you arrive by air then make sure you take a cab from the official ranks outside the terminal. The unauthorised drivers offering rides you’ll see on your way to the taxi rank will prove to be far more expensive!

Music and the River Danube are seen to be inextricably entwined and the Café Budapest Contemporary Arts Festival is another strong link in the chain. This beautiful city deserves even greater recognition than it currently receives, so the festival represents the ideal opportunity of visiting it. 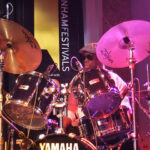